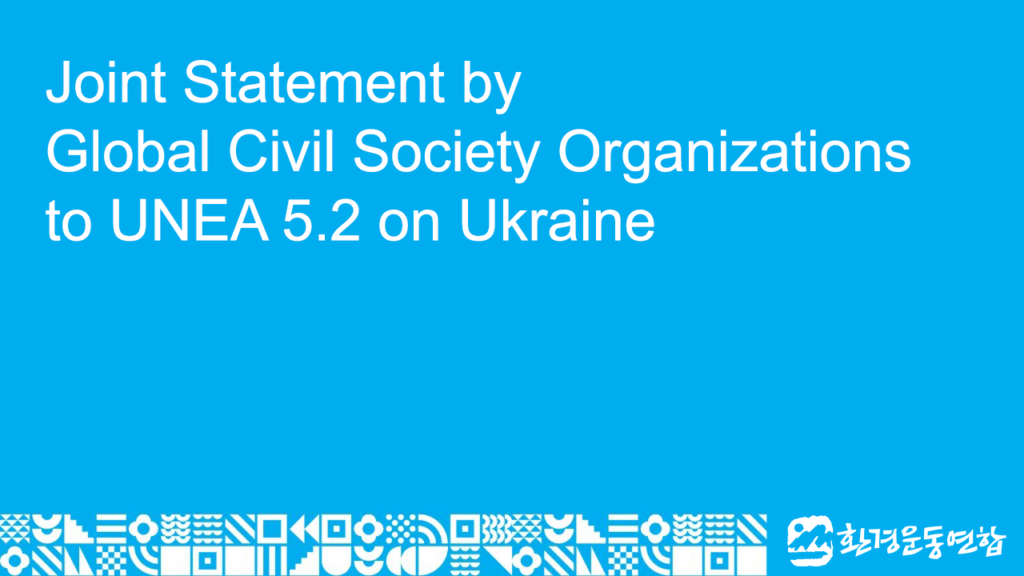 We are deeply worried as we are witnessing the grave humanitarian consequences of Russia’s invasion of Ukraine. This armed conflict poses serious risks to the lives and health of Ukraine’s people in the first place, while in turn this can also bring severe environmental health risks and affects Ukraine’s biodiversity, ecosystems and natural resources that they depend on.
We are gathered here in Nairobi to address a wide range of environmental issues, and to Act for Nature. Yet we must underscore the relationship between armed conflicts and the environment.
Already there are serious concerns over the state of Ukraine’s nuclear facilities. Critical staff struggle with maintenance of the Chernobyl nuclear site, currently under control of Russian forces, and other nuclear waste storage sites are at risk from nearby shelling.
Furthermore, there are hundreds of industrial sites at risk from being targeted, and capable of causing environmental emergencies if hit, placing the health of nearby communities and ecosystems at risk in the near- and long-term. In recent days, several fuel depots and gas lines were bombed, with additional reports of burning warehouses storing chemicals. Damage to water infrastructure affects water security, and damage and disruption to electricity networks heightens the risks of flooding mines storing nuclear and toxic waste in Donbas, that can further increase risks for the entire region, and may eventually make large parts of it uninhabitable.
Destruction of people’s habitats and collapse of environmental governance will further contribute to serious issues around public health, solid waste management and controls of chemical and industrial toxics, in particular those in populated areas. Russian attacks on munitions depots have already led to the dispersal of military-origin heavy metals and toxic hazardous energetic materials, posing additional human health and environmental risks.
In 2016, UNEA-2 adopted a Ukrainian resolution on the protection of the environment in areas affected by armed conflict. The necessity of this was reiterated in 2017, when UNEA-3 adopted an Iraqi-led resolution on conflict-pollution.
Today, we are urging States here in Nairobi to once again, and under pressing circumstances, stress the importance of addressing the relationships between the environment, peace and security. And, in response to the serious environmental risks triggered by Russia’s invasion of Ukraine, to:
Provide funds and technical expertise for an initial rapid environmental assessment by UNEP in consultation with humanitarian agencies and civil society groups, in Ukraine;
Support local and international initiatives for the identification and monitoring of conflict-linked environmental risks and damage, and;
Pledge the environmental assistance necessary to Ukraine to address the consequences of the conflict for its people and ecosystems, and to support clean-up and restoration efforts.
Ukraine is just one of many countries where armed conflicts are impacting the environment and undermining environmental governance. We therefore urge States to ensure that the environmental dimensions of armed conflicts are part of UNEP’s core work, as well as that of UNEA. We urge States to push back against the vocal minority of governments that oppose UNEP’s activities in this space. We also urge them to ensure that UNEP’s historical and vital work on the environmental dimensions of conflicts remains a visible and a meaningful part of its current Medium-Term Strategy, as was promised.
The situation in Ukraine demonstrates why these themes must be a part of the Assembly’s dialogues and decisions. Their absence from a range of relevant resolutions this year has not gone unnoticed. Whether this is the link between biodiversity loss and armed conflicts, between mineral resource governance and insecurity, or in the potential role that nature can play in supporting human security, or in post-conflict recovery and conflict transformation.
UNEP and UNEA must grasp the vital role that they can play in advancing the environment, peace and security agenda, and in turn supporting stronger norms on the protection of the environment in relation to armed conflicts across the whole UN system, and beyond.