・ Immediate need for a forest restoration plan and participation from civil society in both countries.

Recently the Korea Forest Service (KFS) has come under fire for its plan to open up much of Korea’s forests to logging and replanting, in the name of 2050 carbon-neutrality. KFS hoped this would help it reach its goal of 34 million tons of GHG emission reduction by 2050. But what was overlooked in much of this criticism was the fact that 5 million tons of these reductions would be achieved overseas through REDD+ projects.

REDD+, or reducing emissions from deforestation and forest degradation, covers a variety of projects but generally involves developed countries paying developing countries not to cut down forests. Korea began pilot projects in Indonesia in 2013, and later expanding to Cambodia, Laos, and Myanmar. Cambodia’s Tumring REDD+ Pilot Project is the first project where the Korea Forest Service secured carbon credits.

At present only the host countries can count reductions in deforestation towards their emission reduction goals, or Nationally Determined Contributions (NDCs). But Korea is expecting that this will change. Korea’s Cabon Neutrality Committee said as much in its recent 2050 carbon neutrality roadmaps, where it stated that REDD+ would be used to make up shortfalls in the countries future NDCs. In the meantime, Korea can receive carbon credits from these projects, which the KFS says are being sold and the profits used to fund the pilot projects.

Map 1. Logging in Tumring project area, 2000-2021. The solid white line is the boundary of the REDD+ pilot project, and each red pixel represents the degree of forest loss over 20 years. The brighter the red, the more recently the forest was lost. The remaining forests are becoming fragmented, turning into ecologically vulnerable islands. The yellow pixel represents GLAD Deforestation Alert showing a disturbance in the forest canopy, which indicates that trees in that area may have been lost or removed. ©Global Forest Watch

The KFS has proudly stated that last year the Tumring project reduced 650,000 tons of GHG emissions. However, an independent three-month investigation this year conducted by Cambodian and Korean NGOs, has shown the reality on the ground is far different. The investigation which began in May, involved on-site investigations, satellite image analysis, and expert interviews. The fieldwork team was led by Ouch Leng, Goldman Environmental Prize recipient and head of the Cambodia Human Rights Task Force (CHRTF) and supported by activists of Korean Federation for Environmental Movements (KFEM) and the Biodiversity Foundation. The fieldwork team visited 13 out of 14 community forests in the Tumring REDD+ pilot project area, on several occasions.

The investigation revealed that in the past six years since the Tumring REDD+ pilot project was established, more than 37% of the forest in the project area was damaged or lost. According to public satellite data provided by the University of Maryland, the forest area decreased from around 56,084 hectares in 2015 to about 35,544 hectares at the end of last year. This loss of 20,540 hectares is equivalent to an area twice the size of Paris. The fieldwork team contended that the damage in the area is likely greater than what was seen on satellite, estimating as high as 45% loss in overall forest cover. Even more alarming is the current rate of deforestation. In 2020 there was an 8.76% loss of forest in the project area. In the first half of 2021, forest loss has already reached 8.3%.

Most of the deforested areas are turned into large plantation farmland, mainly for rubber, cassava, and cashew nuts. According to interviews with local residents, most of the trees harvested in this process are not for local consumption. It is reported that logging companies from other regions make illegal arrangements with local officials or forest monitoring personnel, make the  local residents handle the logging operations and purchase the timber. According to Ouch Leng, “It’s not a secret that expensive timber from endangered species in Cambodia is actively traded on the black market. REDD+ project isn’t stopping that at all.” 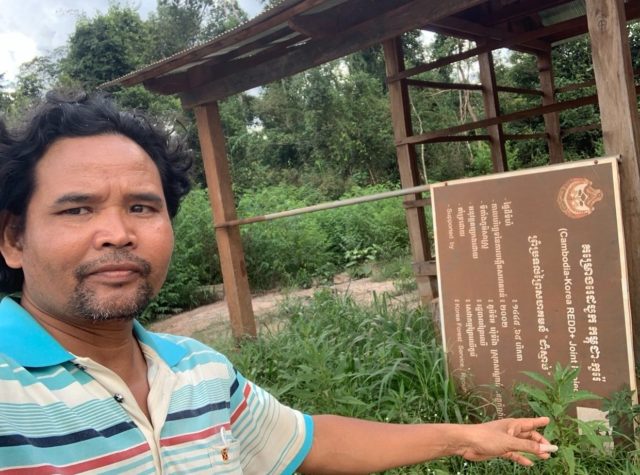 Land grabbing within the REDD+ project forests is yet another issue. According to Mr. Chhem Sopheak, head of the Sochet community forest, located in the southeast of the Tumring REDD+ pilot project, outsiders were recently caught by police for trying to grab land. He also reported cases of people attempting to forge residents or indigenous peoples to gain land titles.

Forest patrol by the local community is one of the core empowering activities of the REDD+ projects, in order to monitor deforestation and logging. However, an allowance of around $50 per 5-person team was barely enough to cover fuel and food costs for patrolling. In fact, the teams interviewed by the investigation team were only receiving an average of $38 per patrol. “It takes 10 people to properly patrol a large forest,” said a representative of the O Dauntey community forest, and a proper patrol may cost “five times the current allowance.” The result is that in many cases, patrol is performed only once or twice a month, utterly insufficient to prevent illegal logging.

After this investigation report was released, the Korea Forest Service has stated that “there has been no large-scale illegal logging at the Cambodian project site”, without providing any counterevidence. Kim Han-min, a Korean activist who participated in the investigation responded, “If the loss of more than 3,500 hectares of forest every year is NOT a large scale for the Korean Forest Service, we are doomed for a completely destroyed forest within 10 years. Rather than denying hard visual evidence, drone footages and facts found in publicly available satellite data, the KFS must better embrace the reality and grant active participation of the civil society in both countries to right the ship before it’s too late.”

For Kim Hye-lyn, International Solidarity Director for the Korea Federation for Environmental Movements, “This incident once again lowers the reputation of the Korea Forest Service, which has been criticized as the ‘Forest Destruction Agency’.” She continued, “The Korea Forest Service’s plan to become carbon-neutral by securing 5 million tons of REDD+, when it cannot properly manage a pilot project, is deceptive. We need a more thorough investigation of illegal logging at the site and conflict with residents.”

Kim San-ha, managing director of the Biodiversity Foundation, stated, “There are too many loopholes in the current structure of REDD+ that relies on monitoring from private carbon emission certification institutions. Carbon credits can be certified even when forests are destroyed like this case.”

Courtney Work, anthropologist and assistant professor of National Chengchi University, who has been working in Cambodia for seventeen years, also added that “many indigenous people around the world are not protecting the forest just because they are paid (money). Market-driven solutions like REDD+ can maybe bring some outcome in the short run to change the ways that businesses and governments think about valuing the forest. In the long run, however, it changes the traditional community values towards the forest toward monetary compensation rather than protecting livelihoods through forest health. With these new values, we will not be able to expect the next generation to do the same (conservation) actions”.