CLIMATE CHANGE AND THE EFFECTS ON AFRICA 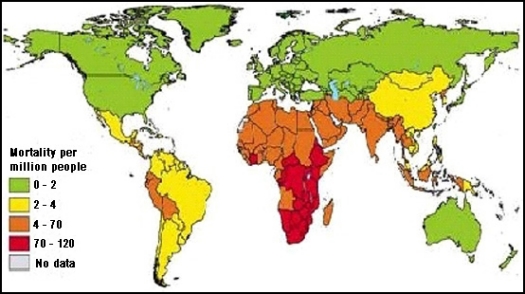 The phrase “climate change” is used generally to refer to the changing nature of earth’s climate. This conception is in itself not a new one but to most people in some parts of the globe, it is either unfounded or a way of getting countries to curb industrialization. Climate change is basically caused by human activities especially those that have to do with the emission of dangerous and ‘unfriendly’ gasses (carbon especially) into the atmosphere. Industrialization is strongly held responsible for this but the question remains; why is Africa (the least industrialized continent) most threatened from climate change? Though a greater percentage of the African public harbor the idea that the call to halt industrialization and save the planet is a disguised technique to keep Africa under-developed, the on-going physical changes occurring on the continenttell a completely differing story. In this article, I will some of the possible causes of climate change in Africa and why Africa faces greater threats regardless of the low level of industrialization. Lastly, I will look at the effects of climate change in African and possible solutions to remedy the on-going situation.

Climate consists of patterns of temperature, precipitation, humidity, wind and seasons. Climate change affects more than just a change in the weather; it refers to seasonal changes over a long period of time. These climate patterns play anessential role in determining natural ecosystems aswell as human economies and cultures that depend on them.Considering that many systems are tied to climate, a change in climate can affect many related facets of where and how people, plants and animals live, such as food production, availability and use of water and health risks.For example, a change in the usual timing of rains or temperatures can affect when plants bloom and set fruit, when insects hatch or when streams are their fullest. This can affect pollination of crops, food for migrating birds, water supplies for drinking and irrigation, forest health, and more.

Climate change is known to be the outcome of different factors a majority of which are triggered by human activities. In the case of Africa, changes in the climateare attributed basically to the emission of greenhouse gasses especially carbon dioxide (CO2) into the atmosphere and deforestation in almost every African forest. CO2 emissions are usuallyviewed as a dominantcomponent of climate change because of their role in global warming. However, Africa, compared to the rest of the world (developed countries especially), emits the least amount of CO2. For example, the state of Texas (USA), with a population of 23 million, emits more CO2 than all 720 million residents of sub-Saharan Africa.

The tropical rainforests of Africa serve numerous purposes. Apart from providing natural habitats for several plants and animal species as well as home to many indigenous communities, they also are vital to maintaining soil fertility through storing and transpiration of water for precipitation and above all, play an important role in carbon sequestration, acting as the Earth’s natural storage facilities for CO2. Deforestation globally and in Africa especially is a leading cause of greenhouse gas emissions (GHGs). The Intergovernmental Panel on Climate Change estimated that 1.6 billion tons of CO2 are released into the atmosphere every year through deforestation activities. Annually, about 25% of GHGs are directly attributable to the cutting and burning of tropical rainforests. African forests amounts to 17 percent of the world’s forests,  occupyingapproximately 630 million hectares ; that is, about one fifth of the continent’s land area.

As earlier said, Africa is the most vulnerable continent to climate change. Being the home to some of the poorest countries in the world, it is obvious that many of these countries are faced with the problem of adapting to climate change. The climatic record for Africa demonstrated warming of about 0.7° Celsius overa greater part of the continent throughout the twentieth century; a decrease in rainfall overlarge portions of the Sahel region (the semi-arid region south of the Sahara); and anincrease in rainfall in east central Africa. Over the next century, this warming trends, and variations in rainfall areanticipated to continue and be complemented by a rise in sea level and increased occurrence of extreme weather events.

A great number of the African population suffers from hunger and extreme poverty. Climate change therefore poses a threat against the on-going actions and fight for the eradication of extreme poverty and hunger on the continent. The effects of climate change will make it impossible to achieve the Millennium Development Goals (MDGs) and also poses a major threat to sustainable growth and development of the continent. Africa is particularly threatenedby visible effects such as spreading diseases, worsening food security, reduced agricultural production, the increased incidence of both flooding anddrought, and an increased risk of conflict over scarce land and water resources. The World Health Organization (WHO) noted that Africa bears the effect of an approximate 150,000 deaths per year that occur globally because of climate change. These figures will more than likely double by 2030. The disproportion between those who contribute to global warming and those that suffer from it is stark. Figure 1 illustrates this disparity.
Climate change in Africa also weighs hard on agriculture. A majority of Africans rely on rain-fed agriculture thus susceptible to changes in climate erraticism, seasonal shifts, and rainfall patterns. More than 70 percent of the population lives by farming and agricultural products make up approximately 40 percent of total exports . What makes it worse is the fact that the poorest groups are those who most depend on agriculture. In this regards, it is easy to see why any amount of warning will increase water scarcity.

Support from development partners is needed to help Africa handle the effects of climate change. Action on abroader range of issues is also needed – by the wider international community, by multilateral andbilateral development agencies, and by African governments themselves. The rate at which trees are fell for logging and fuel should be reduced and the government should educate the local people on the importance of the forest. In addition, more friendly technologies with lesser carbon emissions should be put in place to reduce GHGs emission.

*This is our intern’s column.  -KFEM-